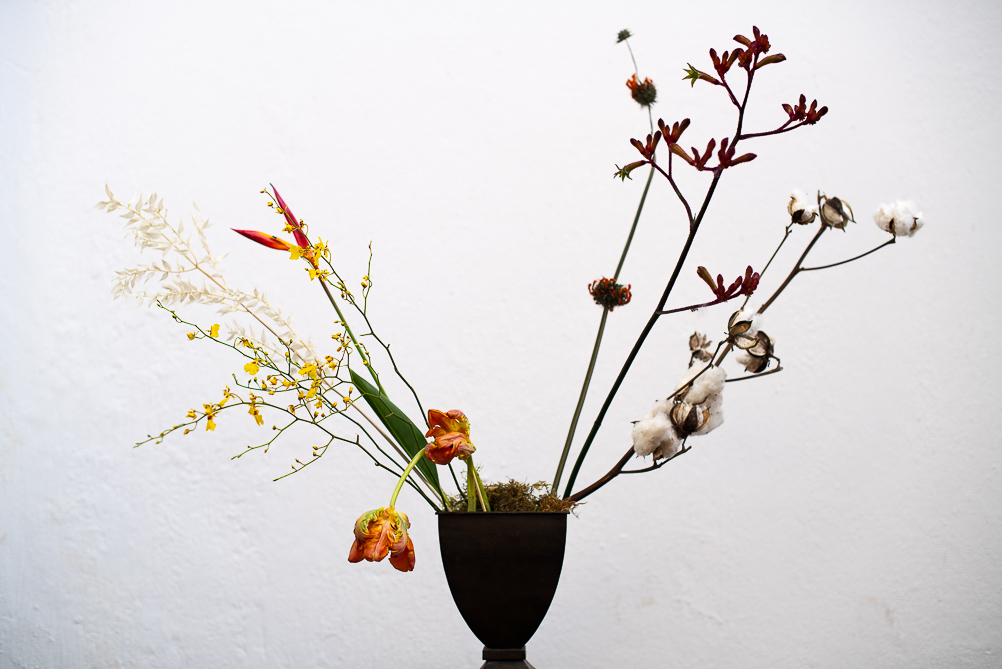 //Autumn leaves us warm. The shadow of summer has crept in. Dressed in her rust-coated leaves, that crunch beneath our feet. With her thin smile and frosted breath, she bites the daylight short and blushes out against her naked landscape, her beauty finally revealed.

Emulate Autumn with a strikingly stark arrangement of colour bursts – bare stalks with detailed bulbs create a dramatic and impressive spray of flowers. 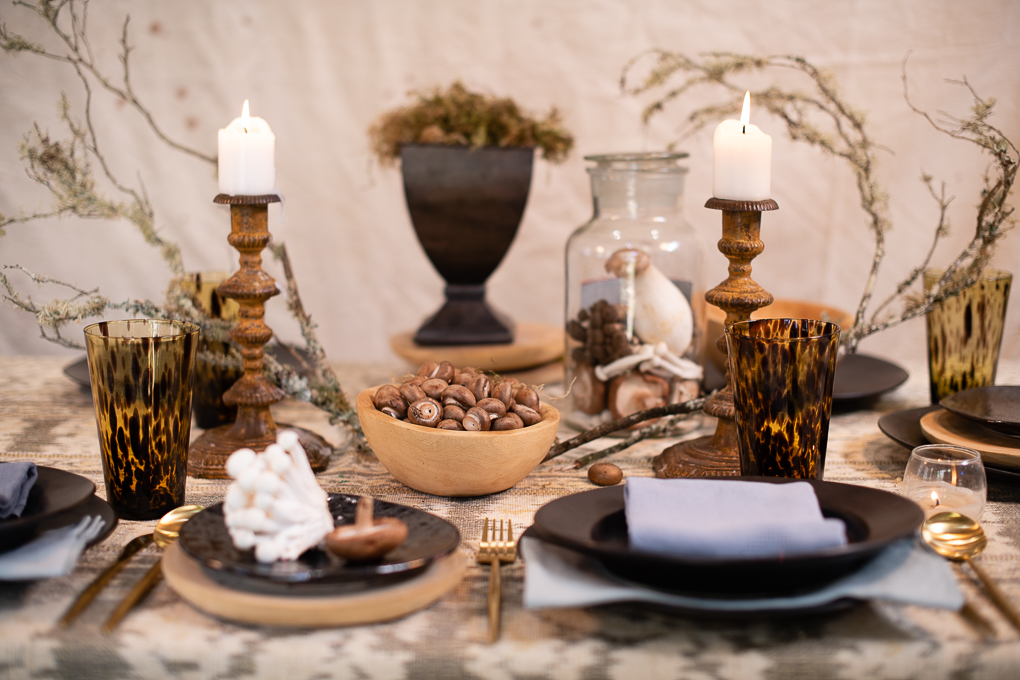 I always say “food is 75% visual, if something looks beautiful it will taste amazing!

With its tones of burnt saffron, tortoiseshell browns, russet and sepia, Autumn offers a magical palette from which to work. 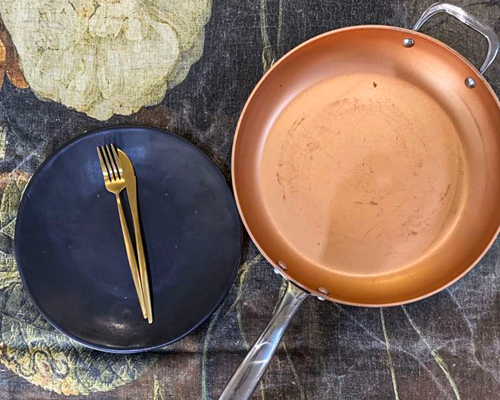 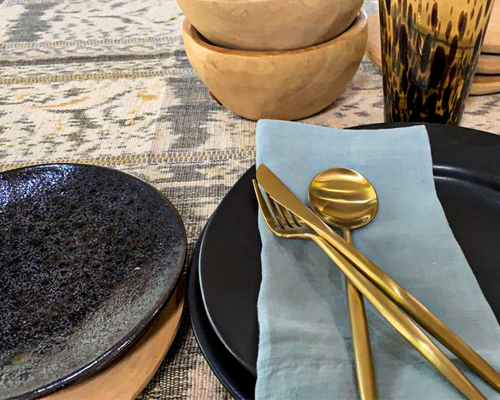 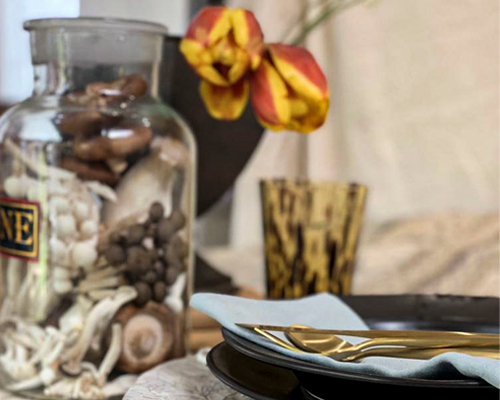 Layering is the key to a well-styled table, and with that in mind, it’s important to remember that height and depth create interest and keep the eye engaged and excited. By mixing up different textures and tones with an assortment of linens, tableware and accessories you can create a unique and striking colour palette for each individual event. A muted Autumn colour is the perfect backdrop on which to build your table setting  – I have chosen a buffed oatmeal table cloth, with a rough sketching of faded denim and flecks of burnt umber which will highlight the rustic colours of the tableware and accessories. From here, I have mixed and melted Autumn hues, tones and saturation, with the rusted antique candelabra, the raw earthy wooden bowls and under plates (subtly bringing to mind Autumn’s bare branches and exposed trees), which are punctuated by the black plates and urn. The feminine inclusion of tortoiseshell tumblers as wine glasses create a sense of juxtaposition, which the golden cutlery seems to further emphasise – bold, masculine, yet delicate

I love to throw in something slightly offbeat, almost out of balance to the setting. In this case, a bowl of mushrooms, a medicinal glass jar stuffed with fungi, which both accentuate the natural tones, create a feeling of home, a feeling of bringing handpicked nature to the table.

I believe the natural aesthetic floral art can add to a setting is both essential and infinite – we are luckily spoilt for choice with the variety of plant life in South Africa – and I don’t use the term ‘plant life’ glibly here, we can literally pluck an amazing arrangement from our back garden, from; fynbos, ferns, flowers, to pincushion proteas, bunches of fresh cut herbs and the good old fashion rose.

For our Autumn arrangement, I have drawn from the age-old practice of Ikebana  – “the Japanese art of flower arranging” blossoms, branches, leaves, or stems into a new life form of art, it’s emphasis is to focus on simplicity and to bring out the inner qualities of flowers, stems, leaves etc and create a study of sculptured emotion. Although not strictly Ikebana, the arrangement is dramatic none-the-less and the combination of almost bare stems embellished with single buds of colour, and contrasting foliage work well to bring home the Autumn theme. Bear in mind, in order to create a similar arrangement, ensure that there is not just a contrast in your choice of ‘flowers’, but that they are opposing in vegetation, colour and arrangement of buds (if any) Pick shades that epitomise Autumn, and then mix it up completely. Keep it simple, almost naked, above all, a noteworthy talking point in your decoration

I’ve chosen mushrooms as my go-to-eat this week, as not only are they the perfect Autumn hue; with their lurid lights, and fertile browns – but, with their buttery creamy texture, homely flavour makes them my perfect choice for an Autumn lunch, brunch or warming fireside dinner. 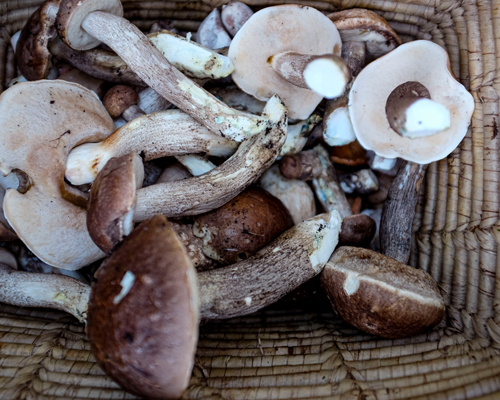 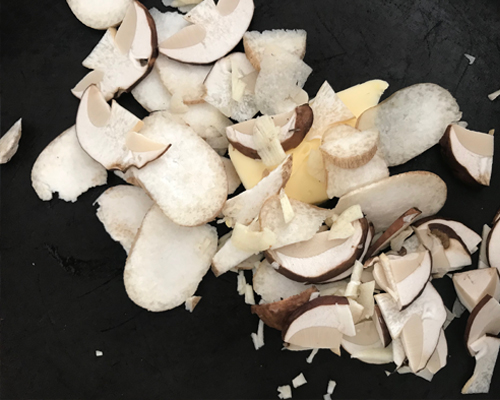 Mushrooms are one of the most versatile sides, fillers, mains and toppers – Whether a sauce for pasta, or as a sublime dollop of creamy mushroom sauce atop a charred grilled fillet medallion, served with a side of chunky salted chips – you simply cannot go wrong with mushrooms.

Some of my favourite mushroom midweek quickies; a fry up of a medley of garlicky mushrooms on a slice of crusty ciabatta. Or a healthy helping of sautéed mushrooms, peppers and spinach, and who can beat a good old fashioned baked potato, split open and stuffed with a creamy goat’s milk and mushroom topping with a teaspoon of pesto – all simple, all delicious.

“Be creative with your ingredients, be open, and adapt to your taste and linking, mix things up and don’t be afraid to be bold !! 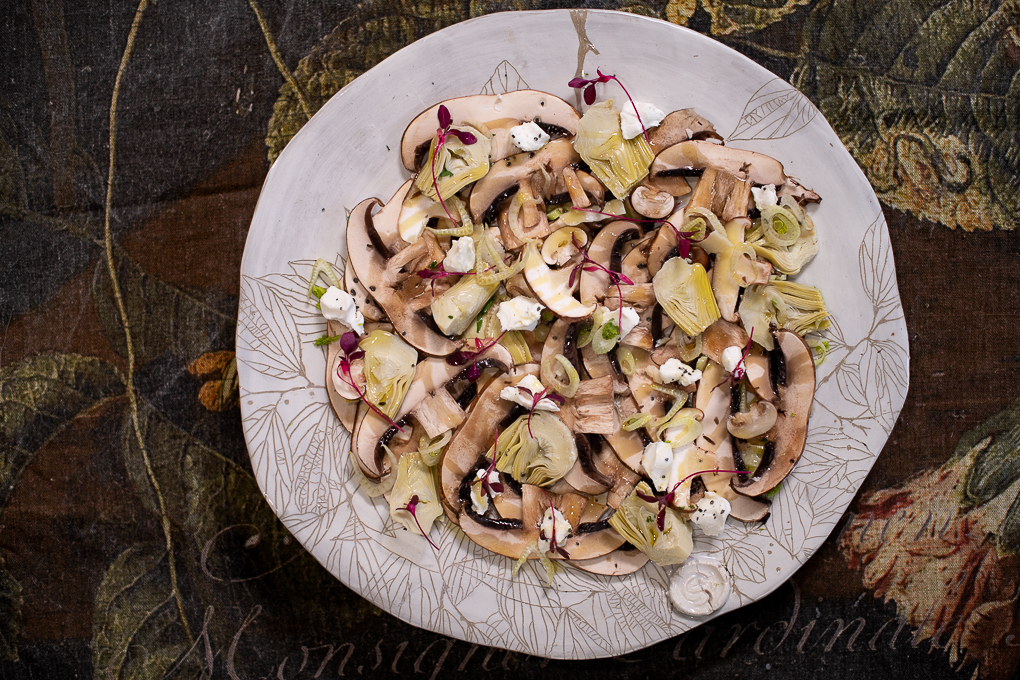 Juice of ½ a lemon

For the creamy sherry sauce:

100ml chicken stock – I love the Nobu one

300g wild mushrooms, chopped (whatever is available – I often use the Woolies exotic punnet)

300ml sherry cream sauce (the one you have already prepared)

Fresh chives, chopped (always cut with scissors so as not to break the internal tube)

Sprigs of fresh chervil (you can substitute this as it’s not easy to find, with either Italian parsley or tarragon or a little of both)

Start with the creamy sherry sauce: 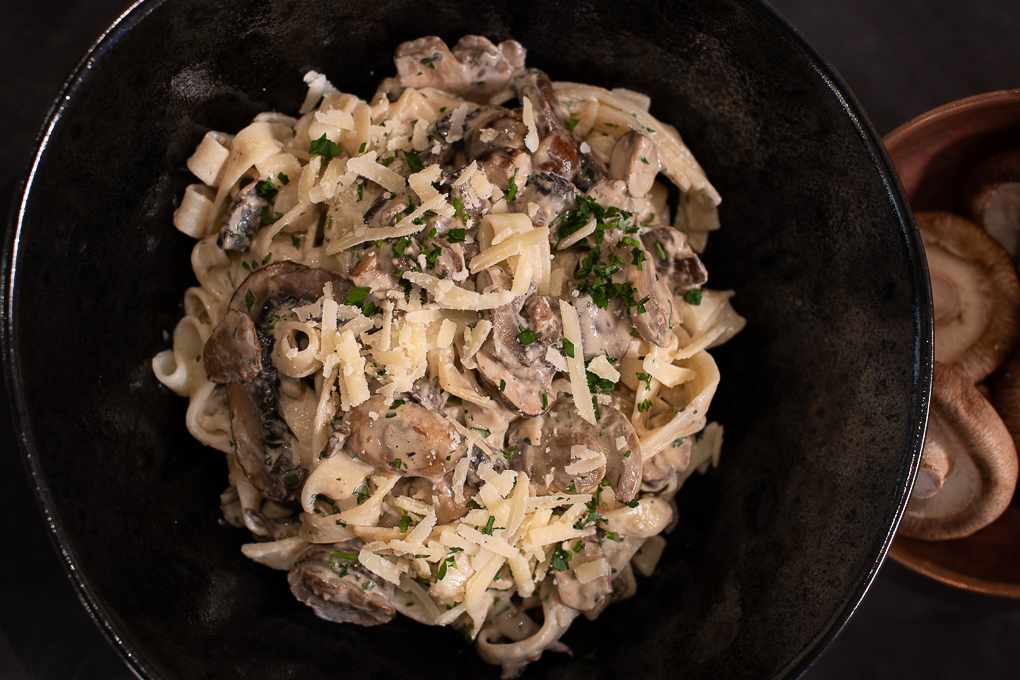 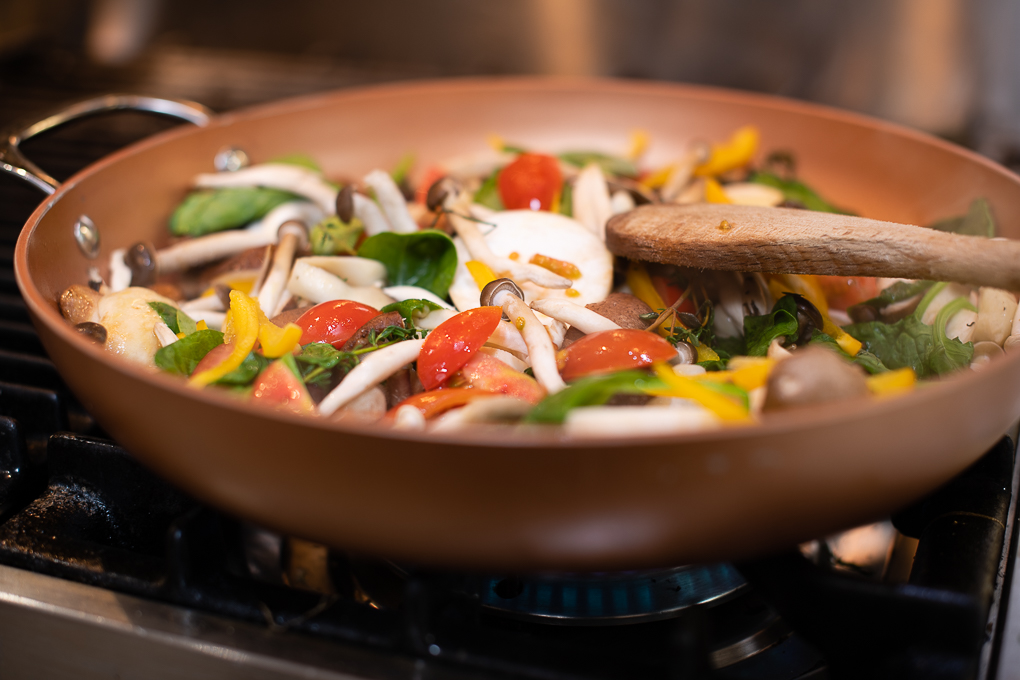 This easy and nutritious mushroom and spinach combination is the perfect side to your protein, from breakfast eggs to a tender steak. The choice is yours.

250g button mushrooms, sliced (you can use your mushroom of choice)

Pinch of nutmeg (optional, but nice)

Drizzle of lemon juice, right at the end

Start your mornings with an earthy wild mushroom omelette. This recipe is perfect for those on the go, it is easy and quick to make.

¼ cup of milk or water

1 cloves garlic, peeled and finely chopped, the other halved 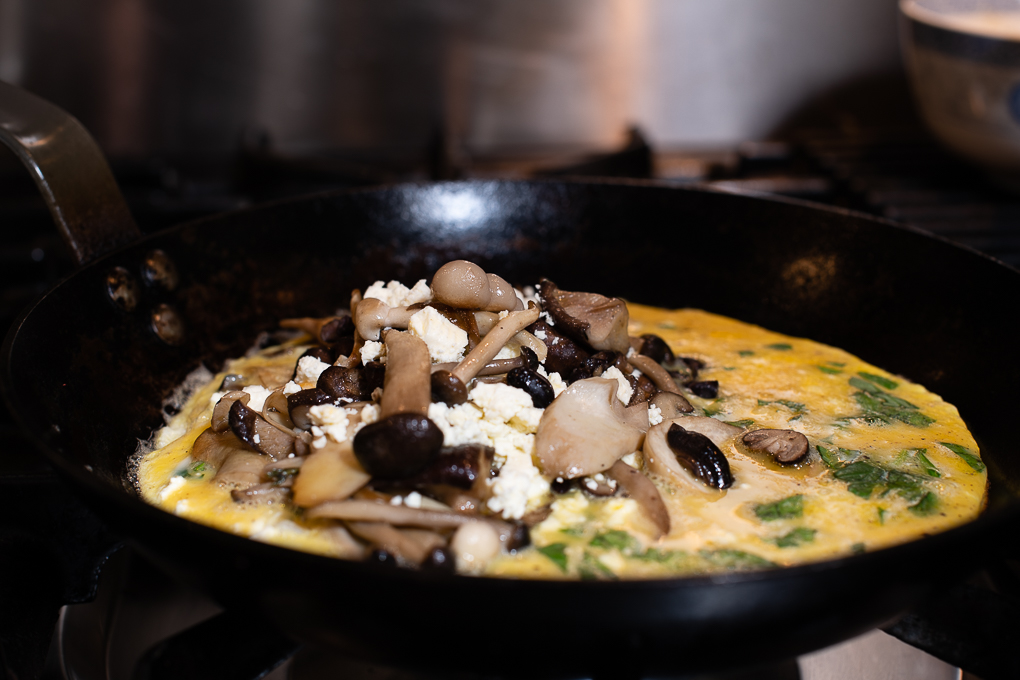 There is something magical about an early morning forest walk – especially in Autumn when the floor is carpeted in a golden haze of burnt out pine needles, and rotting logs –  there’s a quietness that makes even your thoughts feel intrusive.

The mushroom foraging morning, however, was extraordinary – venturing into Cecelia Forest (Constantia, Cape Town) still under a guise of darkness, partially brightened by a day old full moon that snuck shyly behind some watery clouds, alongside Gary Goldman, renowned Mushroom expert and fundi was how it all began. Heading out on our mushroom forage, accompanied by his two dogs, Jack and Russel, an aerated woven basket, penknife and a sense of bubbling excitement, it wasn’t long before we unearthed clusters of mushrooms. From the; sought after Penny Buns, to Poplar Bolete, Euro cow Bolete, and some Blushers (a beautiful blushing mushroom). Digging out Pink Bottoms, Saffron Milk Caps and Cape Russula – while eying from a distance, the Timebomb Toadstool and Poison Amanita. This was a real-time fairy garden, festooned with the wonderful teeming world of mushrooms.

Gary offers daily early morning forages, from his two highly guarded locations in Cape Town – you’ll find him most early mornings foraging for fungus – a passion which started some 15 years ago, and now a fully fledged love affair and fulltime occupation. With a soon-to-be-released mushroom (& other fungi) of Southern Africa field guide, he is both extremely knowledgable and, equally passionate about sharing his mushroom mastery. 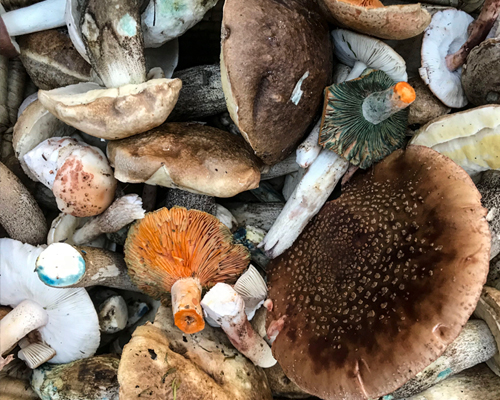 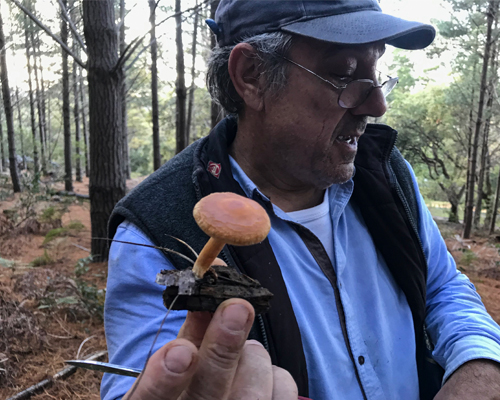 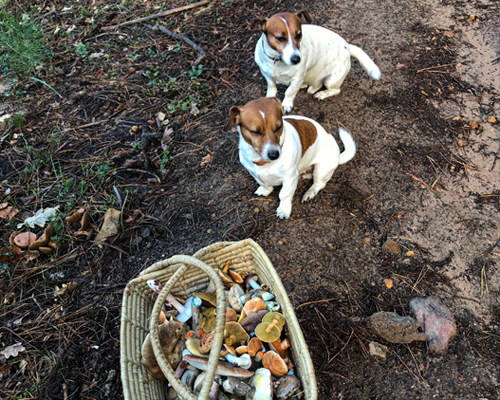 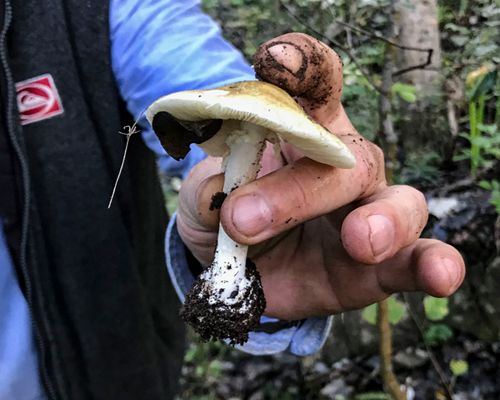 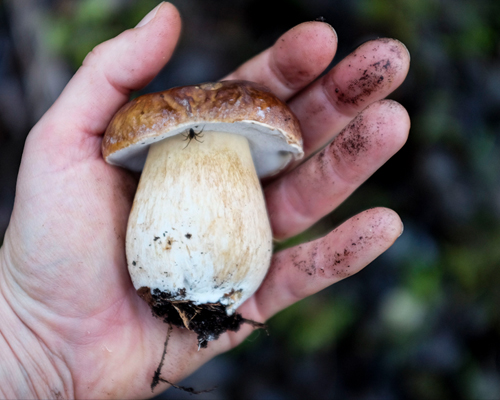 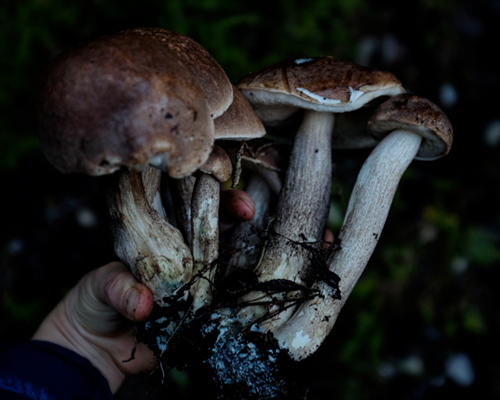 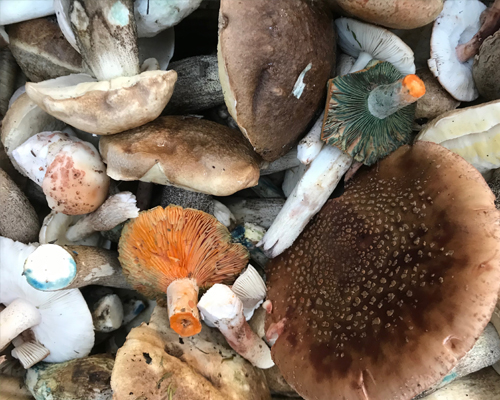 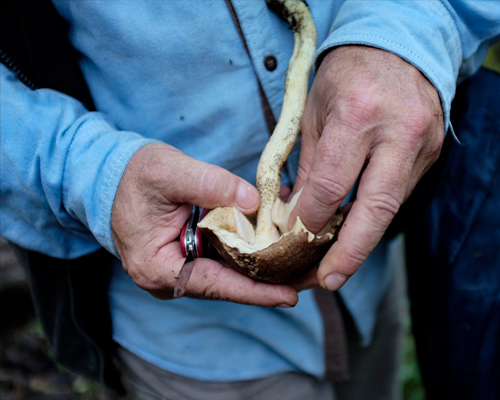 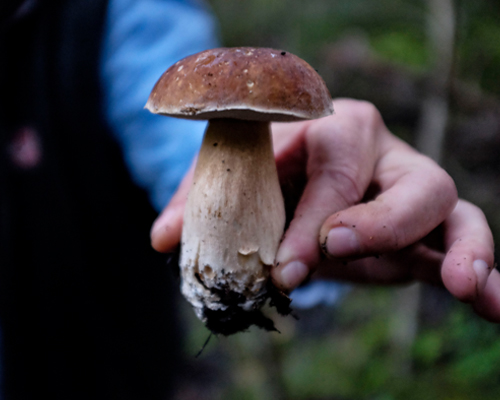 and stay up-to-date with recipes, decor and foodie must-haves from Sandy’s Kitchen.